My involvement with the Maldives Whale Shark Research Programme (MWSRP) began when I ventured to the Maldives to join as a volunteer in January of 2014. I was immersed in hands-on research that provided me with my first experiences with these incredible creatures called whale sharks.  That first month in the Maldives introduced me to a variety of different research techniques and allowed me to meet some amazing people who were just as passionate as I was about whale sharks.  After my return, I began a Master’s program pursuing a joint M.Sc in Marine Biology and Coastal Zone Management at Nova Southeastern University.  For my Master’s thesis, I calculated age and growth parameters from free-swimming whale sharks in the South Ari Atoll, Maldives.

Why study Age and Growth?

Age and growth studies are important for proper management of a species.  Knowledge of growth rates, size/age at maturity, maximum size and longevity are all very important biological parameters that can help us understand the life history of whale sharks.  Most age and growth studies in fish species utilize growth rings that form on the calcified parts of their bodies, similar to the growth rings on a tree.  In cartilaginous fishes, like sharks and rays, vertebrae are often taken from a specimen and sliced into thin layers.  The growth rings that are seen in these layers are then counted and an age is given to the individual.  Aside from validation issues, the major drawback of this method is the need to obtain vertebrae from whale sharks in the field.  Opportunistic sampling of dead whale sharks can only harvest so many vertebrae and this was not a realistic tool for us to estimate growth parameters from whale sharks in the Maldives.  However, the MWSRP had a decade’s worth of encounter data that had length measurements associated with individual sharks.  Even more importantly, these measurements were recorded on sharks that had been re-sighted year after year.  Could we use this long-term dataset of length changes on individual sharks over time to investigate growth parameters of Maldivian whale sharks?

Before we cold tackle this important question, I had to investigate what type of information we had regarding whale shark length measurements.  First, there were three different methods that we could use to estimate the sizes of whale sharks during an encounter.  The most common method was done by visually estimating the size of a shark during an encounter.  After an encounter, we would record an estimate of the shark’s total length to the nearest 0.5 meter.  This method was continuously used since the creation of the MWSRP in 2006.  In 2009, tape measurements began to be recorded in the dataset.  This method involved two researcher’s freediving down above the whale shark and measuring the shark using a tape measure.  Not an easy task as there are a lot of moving parts.  Finally, in 2011, laser photogrammetry was introduced as our third method to estimate lengths of free-swimming sharks.  This method utilized a laser rig consisting of two green laser pointers, these would project two visible points on the sharks and could act as a scale bar once an image was taken.  Next, I had to investigate how these measurement methods differed from one another in order to convert all my length measurements into one standardized length.  This was done by plotting encounters that had more than one measurement method against one another, and some interesting information came from it.  I saw that visual estimates had the most variability compared to the two more accurate methods (not surprising) and that visual estimates tended to overestimate the lengths of small sharks and underestimate the size of larger sharks.  I also found that tape and laser measurements produced similar results to one another.  From this information, I was able to produce equations that could take a shark that was visually estimated at a certain length, and convert that length to a corresponding tape measurement.  Allowing me to convert all my lengths into one standardized unit and provided the basis to tackle the more important aspect of our study. 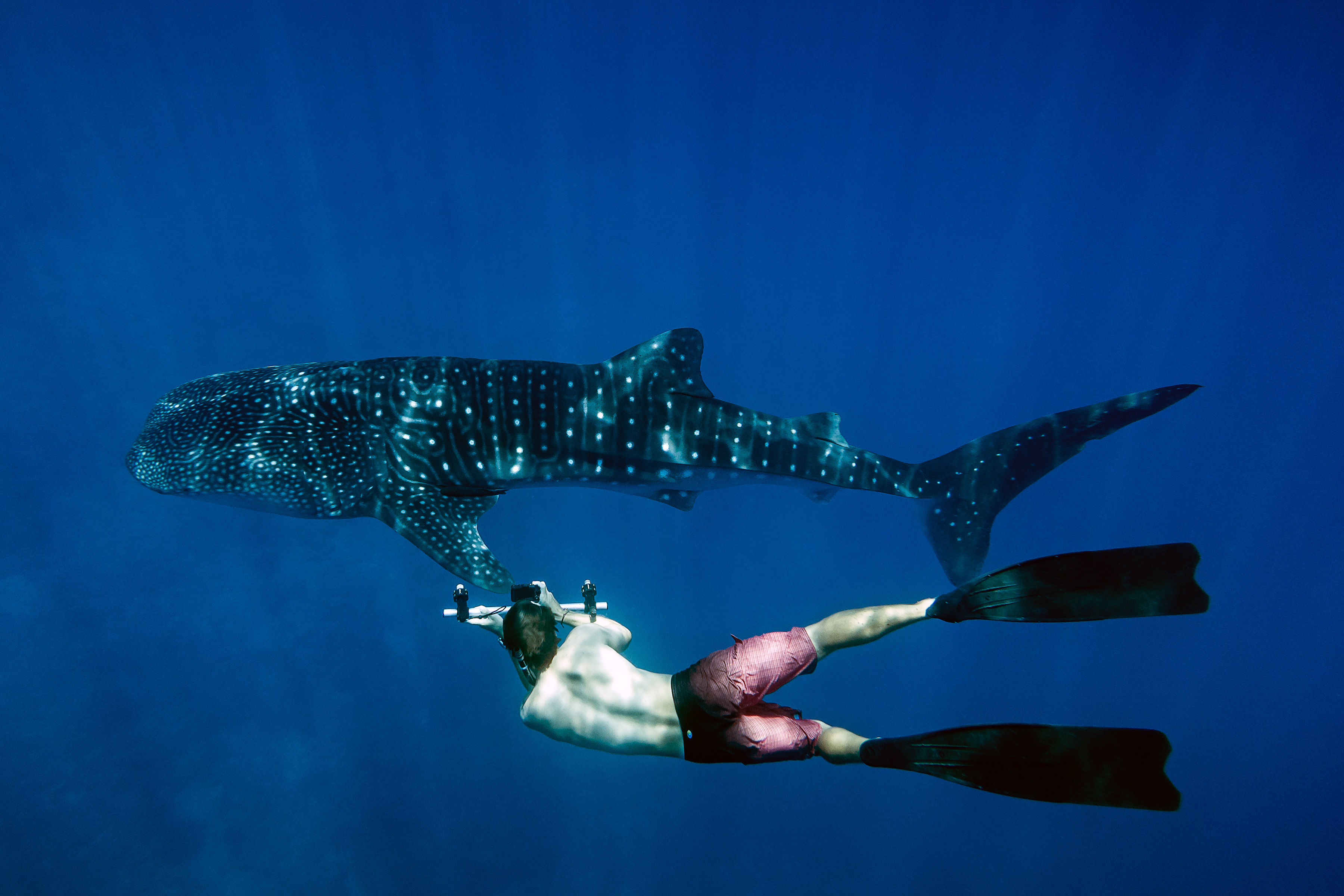 With the hard part done, I could begin to investigate the real brunt of what we were aiming to investigate: age and growth parameters. There were many sharks in the MWSRP dataset that had been seen multiple times over the history of the program and also had length estimates for these individuals as well, by using these encounters I could compare length measurements over time.  This would then give me a change in size with a corresponding change in time, divide those two and I essentially have a growth rate.  Multiply this on a much larger scale and I was able to use all those changes in size and changes in time to produce two very important growth parameters, L¥ and k.  L¥ is the average maximum size that a species reaches and k is a growth coefficient that explains how fast an individual would reach this maximum size.  With these two key parameters identified, I could then produce von Bertalanffy growth curves that would plot sizes and ages of whale sharks revealing a lot of valuable information about life history traits of whale sharks. Utilizing a birth size of 0.64 m, two growth curves were created with one focusing on male sharks and the other including the few female sharks encountered in the analysis.  We found an L¥ of 19.6 m and 18.1 m for male and combined sexes, respectively.  The growth coefficient, k, was found to be 0.2 for both growth curves.  These von Bertalanffy growth parameters where then both plotted to visually see how age and size corresponded. 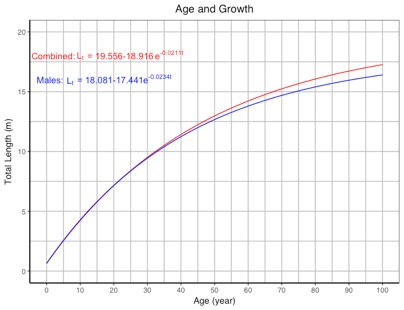 Understanding age and growth are prerequisites to generating information about longevity, age at maturity, and mortality, which in turn help scientist understand population dynamics.  The results from our study told us that male age at maturity corresponded to ~25 years and we estimated a whale shark longevity of ~135 years.  This late age at maturity and long-life span means that whale sharks are susceptible to even small levels of exploitation and may still be recovering from population declines from decades ago.  Understanding how long these sharks live as well as what age they mature will help us better understand population health. The ability to obtain precise estimates of age is important to understand population trends such as mortality and recruitment. These life history characteristics are important for proper management and understanding of the biology and ecology of whale sharks.

This work also allowed me to explore the population and aggregation demographics of the South Ari Atoll as well.  I was able to look at the frequency of sizes and ages of whale sharks that we encounter.  I found that few sharks were seen past 7.5 m or 25 years of age, right around the maturity for whale sharks.  Since my thesis looked at sizes and ages of the Maldivian whale sharks that we encounter, I also investigated size differences between new, transient and returning sharks. I found that new sharks were significantly smaller than returning sharks.  These findings coupled with the fact that some whale sharks have shown site fidelity for over a decade and that no large mature sharks have been encountered provide some support for the idea that the South Ari Atoll is serving as a secondary nursery ground, a place where juvenile whale sharks are spending their time growing until maturity. 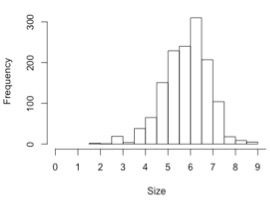 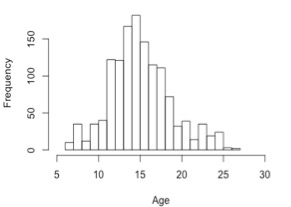 and ages of Maldivian whale sharks