Over the years, the MWSRP has come to realise that the sharks in the S.A.MPA are generally the same group of individuals seen year after year.

A few of the favourite sharks have now been recorded over 100 times in this region. This includes WS018 ‘Adam’ the very first whale shark ever formally identified by MWSRP (if you must know why he’s not WS001; we weren’t very good at id’ing in the old days is the short answer!) and WS071 Fernando who has already been written about on this site, with a few hot on their heals in terms of number of re-sightings.

After a rapid rise of shark numbers on our database in the early days, the MWSRP seemed to reach a plateau at around 180 individuals in 2011 where we began to wonder, is this it? As we then began to spend more time in the field, this slowly trickled up, to around 197 in May 2013. We consistently saw old faces and yet some sharks we only ever saw once, then they disappeared.

One thing that we began to notice early in 2012 was that new sharks to the database seemed to come quick fire one after the other. Only a few sharks at a time, but typically in the summer period you’d get 2 or 3 new individuals turning up. As a general rule, they were quite small – circa 3.5 to 4.5 metres – though the occasional new whopper would turn any hypothesis we had about this on it’s head. Other characteristics of these newbies? Subjectively, they initially seem quite ‘curious’. Whilst acknowledging that subjectivity, anthropogenic tendencies and science are never going to make a great threesome, nonetheless new sharks are often seen surrounded by a gaggle of tourists as they swim round in circles ‘checking everyone out’.

What has been noticeable about this particular month is the number of new sharks being seen. In that month alone we have seen 5, probably 6 (a challenging photo for identification is holding us off announcing the 6th). To put that in perspective, we have only had 9 in the previous year! Below are the newest members to the Ari atoll ranks!

Is the Big Fish Network Helping?!

One major consideration before we get too excited about possible recruitment is the thought that these sharks may be around in the Maldives anyway and we’re just seeing them now because we have more people in the water contributing photographs via the BFN. That is a strong argument, though slightly tempered by the fact that this is not the first month of the BFN operating and we have been seeing a lot of familiar sharks submitted before this rush of new ones came about. As scientists, we’re quietly hoping that some exciting development to do with seasonal oceanic currents or the likes is behind this! As the makers of the BFN however, we’d be quite content if it really was just a symptom of people joining the band wagon! Either way knowledge, understanding and hopefully even science stand to prosper. 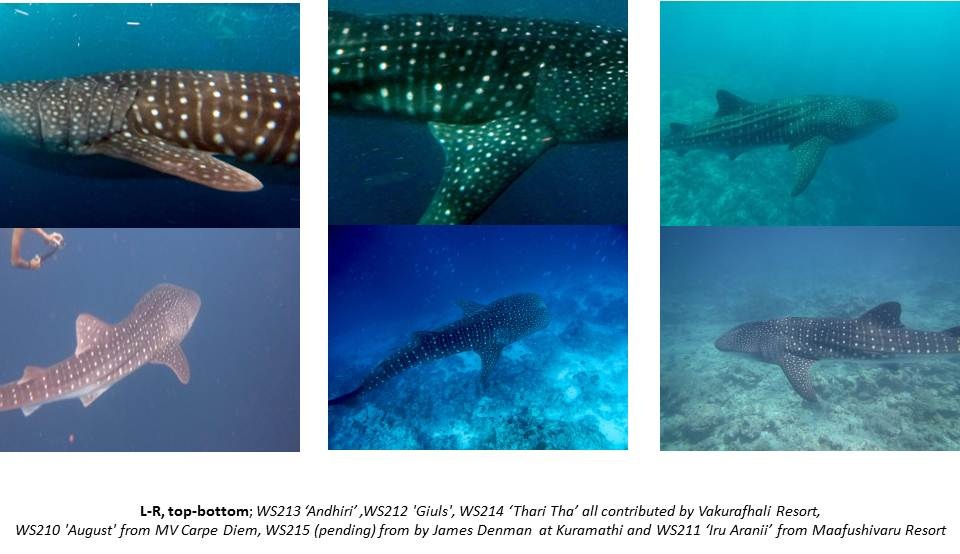 Richard long ago used the term ‘wave of recruitment’ to describe the sudden arrival of several new individuals. But what causes it? We’ve got some ideas, but we’d very much like to hear yours. If you head over to our Big Fish Network page you can join the discussion post ‘Big Fish, Big Mystery, Help!’ to have your say. We’d love to get some more ideas in, no matter how ‘left field’ and please do put forward a reason why or any evidence you have to back up your hypothesis. We can then work to knock them off one at a time until hopefully we get something to work with. Scientists call this making null hypothesis, but I prefer the quote from Arthur Conan Doyle; “Once you eliminate the impossible, whatever remains, no matter how improbable, must be the truth”.