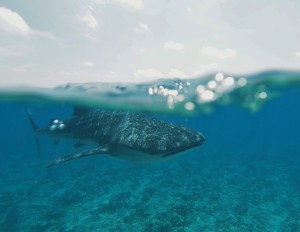 A few weeks ago the MWSRP had a nice long encounter with a whale shark later identified as ‘Fernando’, or WS071 to his friends. Nothing unusual about that, we see lots of whale sharks. What was unusual however was the reaction from the team; “Hey it’s Fernando! Cool, good to see you again buddy!”. We’re all genuinely chuffed to see this individual.

Now as scientists, we know full well that we shouldn’t be falling into the trap of anthropomorphism, but as humans who love what we do it does become hard not to! We know too of course that any emotive feelings toward these sharks is completely non-reciprocal. Yet we can’t forget that year after year we’re seeing a life unfolding in front of our eyes and just occasionally, with it a character.

Different whale sharks the MWSRP know behave in different ways; some sharks almost always swim like their tails are on fire, others inevitably just cruise along completely ambivalent to these sunburnt creatures invading their realm. But another group of sharks seem to have that x-factor, a little bit of fishy personality that somehow makes you feel like you just had a wildlife ‘moment’.  WS071 is one of those sharks. In fact, we’re so fond of Fernando that we’ve started naming our researchers after him (Mr. Fernando Cagua joined the team in October 2013)!

We first saw Fernando (the shark that is!) on 30th April 2008. He was a pipsqueak at that time, one of the smallest sharks we had on record and originally estimated at just 3.5m (11.5 feet) and skinny as a rake. He, and like 95% of our sharks it is male, has since honoured us with his presence on 62 occasions, making him by far the most frequently sighted shark in our records. 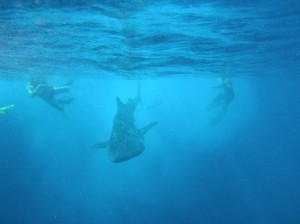 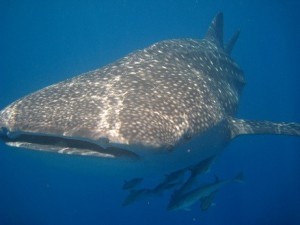 Fernando the pipsqueak – in May 2008 (Left) and now (right) filling out as a teenager!

During the time we’ve known him, Fernando has had more than his fair share of knocks and bangs. A run in with the hull of a dhoni in 2009 left him with some pretty nasty abrasions on his left flank. Fortunately he recovered well from this knock (see the photo sequence below) as he did from the less serious ones to his head, back and tail. 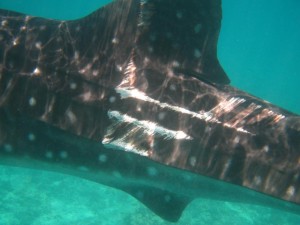 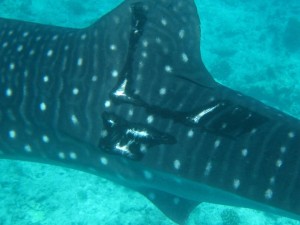 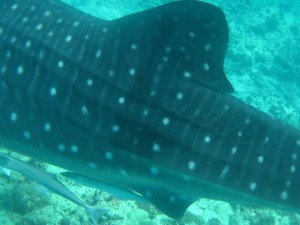 Fernando has been measured over the years a total of 18 times. His last measurement, using our laser photogametry apparatus earlier this year put him at 5.94m, or just under 19 and a half feet. As always with whale sharks though it’s not just the length increase that makes him appear bigger, but the bulk. He is much wider and stockier now, with his head appearing about twice as wide as it was when we first saw him!

While he has now grown into an imposing creature underwater he also retained this fantastic inquisitive charm, as you can see from the pictures in this post. It’s not unusual for you to have to get out of his way when he comes to say ‘hello’!

We’re back to anthropomorphism aren’t we?! Well I’d like to point out that this has at least got a place in conservation. Plucking the emotional heart strings of the public is something that has been subtly used in advertising drives to protect the cute and furry species of this world for decades. With sharks it’s a little harder; they’re not exactly doe-eyed! Whale sharks have the looks and the size to create an aura, but who’d have thought that they’d have a bit of a personality on top?! I think whale sharks like Fernando have infused this attachment into the MWSRP team and I guess it does drive us in our work. Wouldn’t it be great on a global conservation level if the wider world felt this attachment to sharks too? If people began to see them not just as fish, or shock-horror-sh-sh-sharks-! but as individuals who go about their storied life the best they can, just like the rest of us? Post like this are a start, but we can all help get the word out. 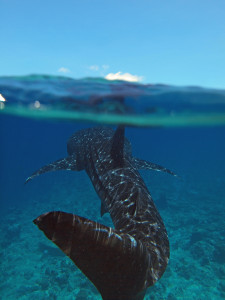 So apart from this feel good appeal, has seeing WS071 so often got any actual use to us in scientific terms? Well actually yes, big time! The South Ari atoll MPA has one of the highest individual re-sighting rates of any whale shark aggregation on the planet, so with help from regulars like Fernando et al our research on things like healing rates, growth rates, sexual maturity and seasonal movements may be unique in terms of the temporal depth of data.

What we have found however, is once the sharks get to around 7.5 – 8m in length, they ‘fly the nest’ from the Maldives. This length corresponds with sexual maturity, and larger sharks approaching this size which we have seen year on year then suddenly disappear. Where they go? No idea – it’s something we are working hard to find out. Having become so attached to him though, it must be said it will be a sad day when Fernando eventually decides to head off.

One thought on “Good to see you again!”