Hey I’m Sam, a postgraduate student from the University of York currently studying an MSc in Marine Environmental Management. I have been very lucky to able to come to Dhigurah, Maldives to work for the MWSRP collect data for my Master’s dissertation, which is on the factors that influence whale sharks’ preferred aggregation sites. My first few days here have been amazing and I am already learning a lot.

Fun Fact: Although a whale shark’s mouth is large enough to fit a human inside, their throat is only the size of a human fist, and so is definitely impossible to swallow a human!

Whale sharks are the largest species of shark and fish in our oceans today. Yet these gentle giants find themselves under threat from a variety of environmental and anthropogenic influences and as of June

Ultimately very little is known about this magnificent species and what influences their behaviour, which is why research programmes like the MWSRP are vital to help increase our understanding, and thereby protection of whale sharks.

Each whale shark has their own unique pattern of spots that can be used by scientists to identify and track individual sharks. The MWSRP takes photos of these unique side profiles from the 5th gill to the end of the pectoral fin on both the left and right side of the shark, which can then be uploaded to their database where they can be used to identify sharks. The re-capture photo identification methods used by the MWSRP have the added benefits of being a non-invasive method of tracking the sharks and has been demonstrated to be more successful in the long term.

Fun Fact: What’s really cool is that this technology was originally developed by NASA in order to identify star constellations!

From Sunday to Thursday at the MWSRP you spend the day stood on the roof of the Dhoni trying to spot whale sharks. When a whale shark encounter does occur it is critical we get some ID shots of the shark so we can identify if it is a shark already on the database or a brand new shark. We also log their GPS location, their estimated length, their sex, behaviour, distinguishing features and the severity of any injuries, if any.

I will never forget my first encounter with a whale shark named Adam. As you get into the water nothing quite prepares you when first set eyes on this incredible, charismatic species. After marvelling at the sheer size of Adam at 6m the first priority is take the identification photos, followed by examining any injuries the shark may have sustained. After sexing the whale shark the next aim is measure it using laser photogrammetry as well as a simple tape measure! Despite my time with Adam being brief (though in the moment it felt much longer as you cherish and savour every second), you really appreciate any amount of time you get to share with the largest species of fish on the planet. 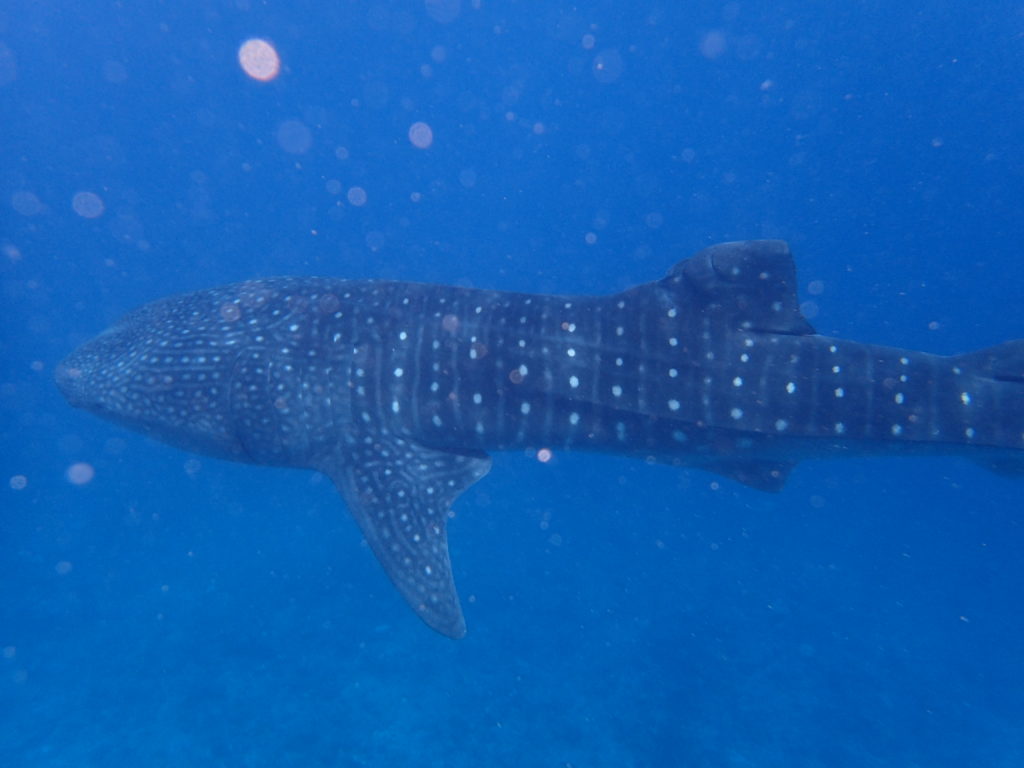 Fun fact: the largest size ever recorded scientifically was 12.6 meters and 15 tonnes, though reliable reports have suggested they can grow to as big as 18m (So Adam in comparison was unbelievably quite small!).

Key environmental factors that are noted during the encounters are temperature (oC), reef depth (m), wind direction, wind speed (km/hr) using an anemometer and wind direction using a compass. Cloud cover, sea state, current direction/strength and visibility using a secchi disc and surface current using a tennis ball with weights attached which we note the GPS location and time when we drop the ball and retrieve the ball 5 minutes later.

It is also important to note how many other boats are present at the encounter and how many people are in the water with the whale shark. The quantity of people or vessels in the water, or their proximity to the whale shark can prompt radical changes in behaviour in the whale shark, such as shark changes of direction or diving down to greater depths in order to get away. Taking note of the social and economic impact of ecotourism is important as there is a high frequency of boat related injuries amongst the whale sharks here.

Here in South Ari Atoll the number of whale shark sightings and encounters have remained pretty consistent over the last 8 years, whereas in Baa atoll numbers have declined considerably and seem unlikely to recover any time soon. My thesis is that it was the accumulation of significant temperature rises and drops in ‘chlorophyll a’ and productivity that prompted whale sharks to abandon Baa atoll, and it is the differences in bathymetry of the two sites that encouraged the whale sharks to stay in South Ari.

Understanding whether this is the case is a vital step in understanding the conditions whale sharks favour so that we can work together to help implement regulations and measures that adhere to their favoured habitat conditions.

I’m very lucky to be part of a team of like-minded staff and volunteers who have all come together in our mutual love of sharks and a passionate desire to help protect, conserve and educate people on these gentle giants of the oceans.

Keep tuned to check out my blog next month to see how my research has gone and to read more updates on my experiences and adventures with the MWSRP!

If you are interested in the research the MWSRP does check out their social media accounts for regular updates and insights into what its like to work the project.