To be honest choosing a career in the environmental field is the last thing I thought I would do. I joined the Bachelor of Environment Management at Maldives National University out of pure curiosity for nature and the passion I have to explore fascinating new things!

It was during the second year of my degree program that I learned about Maldives Whale Shark Research Programme (MWSRP) and since hearing about them I was keen for an opportunity to be a part of the team. As a module in final semester of the course there was 4 weeks internship and I was incredibly lucky to be placed as an intern for the MWSRP. 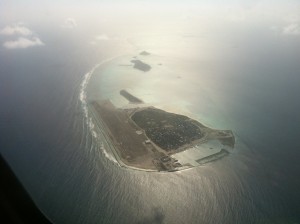 Coming in to land at Maamigili airport

After about 20 minutes flight from Ibrahim Nasir International Airport I arrived to Maamigili in the afternoon where Katie, Iku and Muchi were ready to pick me up with the research dhoni. The very first thing Katie briefed me about was MWSRP and whale shark encounter guidelines in case we saw one straight away! I was quite concerned about my swimming skills so Katie asked me to go for a test snorkel, so I had my first jump outside Ariadhoo island just outside Maamigili harbour. I was pretty excited to explore the reef as I have heard about the beauty of the place. I’m happy to say the swim went better than I thought!

That evening when we arrived on Dhigurah where the team lives I was explained the process of filling in the data logs, how to use the portal and given a presentation on Whale Sharks and the MWSRP Research aims, which helped me to understand more about what MWSRP do.

Unfortunately, the weather was horrible for the first week of internship! However we enjoyed the rain on the boat and I was kind of surprised with myself that I dared to go for snorkeling in those stormy condition as well! Since the weather was making it impossible for us to spot the sharks from the boat I got to experience drag snorkeling for the first time which I enjoyed so much. By the end of first week, with the help of MWSRP team I learned duck-diving and was utterly at ease in the sea.

Also that first week, I enjoyed being the part of a very interactive presentation given by MWSRP team to the students of Dhigurah School. I helped put the presentation together with the other volunteer called Muchi. On the day I did the introduction to the school presentation and helped out one of the school groups when it was time to do the practical shark ID part using I3S software which is used to identify the sharks, which is important for making valid and reliable data.

After a week of heavy rain the sun came out giving me such an overwhelming happiness with my first shark encounter “Pakawa”! He was so beautiful! The sea was still quite rough but we encountered the second shark a few minutes later on the same day and despite being a bit sea sick I couldn’t help myself but jump in to swim with the adorable “Lucky”. Both sharks were feeding so we didn’t have to have a long swim after them, we could just stay where we were and they swam round us.

Apart from the sharks I was lucky enough to encounter manta rays at Dhigurah Arches the following day. The real pleasure started with the arrival of new volunteers Kate, Susan and Jacob who are amazing and I was blessed on the first day with the volunteers to see 6 different whale sharks in 8 encounters. It was a remarkable moment when I was following one shark and turned around the second one being right behind me. It went right under my belly – Woooahh!

That was the busiest day for us on the reef and we had a lot of data to do that night and putting all the sharks onto the Portal so they could go on the MWSRP App so that it would be easier to keep track of what the contributors on the network and the sharks are up to on a daily basis, as well as the weekly encounters and the indications regarding the impacts caused per month.

Altogether I had 11 Whale Shark encounters with 8 different sharks and we also got to do a good deed, as I along with the rest of MWSRP team removed a huge fishing net entangled around the corals at Ariadhoo island.

Now that I’ve finished my two weeks ‘in field’ I am continuing my internship with a presentation to the team about my experiences, writing a report and logbook on my placement with MWSRP which all counts towards my marks for the module of my degree. It’s been a really great two weeks with MWSRP and I’ve learnt a lot about whale sharks and the MWSRP. I have learned a lot about myself as well!