During the week of October 11-17, 2013, MWSRP staff members Ben Fothergill and Rachel Bott facilitated and taught a class on climate change, ocean acidification, and whale shark research for students from the American School of Doha. The week long service-learning trip was based on the local island of Dhigurah in South Ari Atoll, Maldives.

A group of 21 students and 3 teachers from the American School of Doha visited Dhigurah Island, South Ari Atoll, Maldives for a service-learning trip of a lifetime.

Facilitated by International Travel for Schools (ITS) and MWSRP, the goal of the programme was to enhance students’ understanding of climate change – specifically ocean acidification. Ben and I were thrilled to expose the special world of Maldives’ marine environments to the students. There was a lot to cover during the short week and we decided to give the students a mixed approach of both theoretical coursework and experiential learning activities. The students found themselves both in the classroom and out under the hot Maldivian sun searching for whale sharks and other exciting marine life.

Their coursework was filled with lectures on subjects such as coral reef ecology, current global pressures on the earth’s environment, climate change, and ocean acidification. It seems we were really able to engage the students in these subjects – a couple had never heard of ocean acidification before and it was nice to have meaningful discussions with them about this.

During our mornings and afternoons on the South Ari Marine Protected Area (S. Ari MPA), the students were lucky to encounter several different whale sharks (Rhincodon typus) which they were able to swim with and document as part of active research. In addition, the students were also visited by pods of spinner dolphins, inquisitive turtles, and endless reef inhabitants such as large schools of morish idols and trigger fish. Being able to take their lessons and thoughts from the classroom and apply them while in the water had a tremendous impact on their experience. 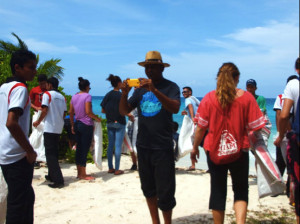 The students were fortunate to share a variety of unique adventures.

They tried their hand at night fishing, danced to the beat of the local Boduberu drums, and engaged in sports matches against their new Maldivian friends. The group also teamed up with the students from their host island’s school and embarked on a mass beach clean to help maintain the pristine beaches of the island.

They also visited a local school on a neighbouring island and were shown what life is like in a Maldivian school. After a brief presentation, the group was also shown some of the island’s unique features, which included a visit to a beautiful mosque and the island’s Banyan trees that date back to 350-400 years old. The vines of which apparently make for a sturdy swing as instructed by the local students. 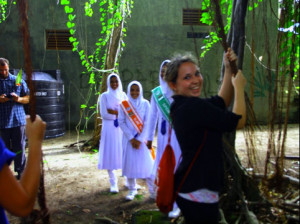 Swinging from the vines of the native Banyan tree.

A LIFE RICH IN EXPERIENCE

Not only was this field trip an opportunity for the students to visit an idyllic tropical paradise, but the excursion also provided the group with a wealth of experiences.

They were able to immerse themselves in island life – to discover for themselves what it is to be a student in a Maldivian school. They documented and recorded whale sharks in their natural environment and how to identify them and critically understand the pressures affecting them. And they were able to learn about global pressures, which will affect and change the Maldives within their own lifetime.

The list is endless and the shared memories will be remembered forever. I hope they continue to don their mask and snorkels, remain passionate about current climate stresses, and keep adventuring!