One of the many truisms in marine conservation is the old adage that “out of sight is out of mind”; basically people don’t care about what they can’t see.

Many moons ago as a marine biology student at Plymouth University, this point became embedded in my thick skull (along with other important points such as the reality of “the tragedy of the commons” in fisheries and critically how Semibalanus balanoides evolved probably the longest penis relative to their size of any animal… I was 18, it seemed funnier then). I guess at the time I didn’t really believe it. Having grown up by the seaside, in a village which had a harbour at the core of community life, I had no prior exposure to anyone who may not be excited about the mackerel season starting or it being a quiet period for lobster catches. Life then treated me to a stint working on a resort in the Maldives, which did nothing initially to change my view; soaking up bar-side stories from divers living the dream on a daily basis has that effect.

Then came some time in London, where the plight of the oceans is of real interest only to a select few and / or of passing interest to those stuck in a broken down tube train with nothing but a newspaper article on it to read for distraction. Conversations about my interests as a diver, be it at work, in the pub or sitting in a barber’s chair invariably lead to lots of basic questions or just comments of the “I wouldn’t like to go in the ocean, there’s sharks in there” variety. As a country bumpkin exposed to the real world for the first time, I was really surprised that things like marine pollution, fish stock levels, destructive fishing methods etc. etc. were not really in the general public’s focus. The sea is very pleasant to look at, but the health of its inhabitants seemed superfluous.

Taking it on Board

Of course, with a few more years under my belt I now get that a Stockwell barber has much bigger problems closer to home than how having scallops for dinner may negatively impact benthic communities off the Cornish coast. It has however, help shape how awareness and education would become an important building block in the structure of MWSRP.

Fast forward to today and the MWSRP is blessed to have Ibrahim Shameel on the team. Among his many talents is the ability to swim like a fish. In fact, he was the only person to represent the Maldives Men’s swim team in the 2008 Beijing Olympics. In one 6 foot 3 inch package therefore, we have a person who is perfectly trained to improve awareness and nurture advocacy in the best possible way; by safely showing people what is beneath that blue surface. 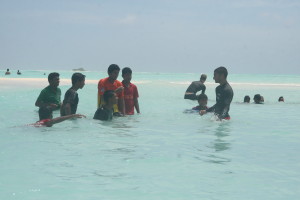 At the international level we have our volunteer researchers. Granted, most people coming out with us are already ‘concerned citizens’ in regard the oceans, but when they return to their distant homelands they are invariably even more informed and enthusiastic advocates of marine conservation.

At a local level, taking students from the South Ari atoll schools out to see whale sharks has been something MWSRP has been doing since 2007. But while one field trip may be an exciting distraction from school for a day, we figure that being able to safely go in and have a look at the marine environment whenever you want to is a much more valuable life skill. But here’s the sticker; not everyone can swim. 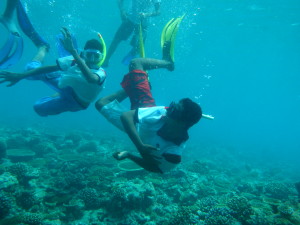 To that end then, we have recently begun basic swimming classes for older students who would like to learn or who want to improve their skill sets, with Ibrahim Shameel at the leading edge. It’s early days, but the hope is that by making someone safe in the water they are later able to fully enjoy the marine life on their doorsteps and become one more steward of the realm we love.